Bangladesh
Home  »  Bangladesh  »  Sitakunda fire out of control for 39 hours

Sitakunda fire out of control for 39 hours

Thirty-nine hours have passed since the catastrophic fire at Sitakunda in Chittagong, but it has not been brought under control. Several containers are still burning. Smoke is coming out of more than 50 containers. The fire service says there may be chemicals in a container next to the burning containers. For this reason, they are working to control the fire with caution. Their main goal now is to bring the chemical container under control.

The fire service is working to control the fire inside the depot till 11 am on Monday (June 6), said Agrabad Fire Service Deputy Assistant Director Md. Fakhruddin. On the spot, several containers on the west side of the depot were on fire. Members of the fire service are sprinkling water on the blazing fire. Besides, smoke is still rising from more than 50 containers. Besides, the whole area has been reduced to rubble by fire. Army and fire service personnel are working together to put out the fire at the depot in Sitakunda. Workers of Chittagong District Administration, Sitakunda Upazila Administration, RAB, Army, Fire Service, Red Crescent, CPP and various local social and human rights organizations are working jointly at the spot.

Meanwhile, Home Minister Asaduzzaman Khan Kamal, State Minister for Shipping Khalid Mahmud Chowdhury and State Minister for Disaster Management and Relief Dr. Md. Enamur Rahman. On the other hand, DNA samples have been collected from the relatives of those who were not identified in the fire. After the sample test, the body will be handed over to the relatives. 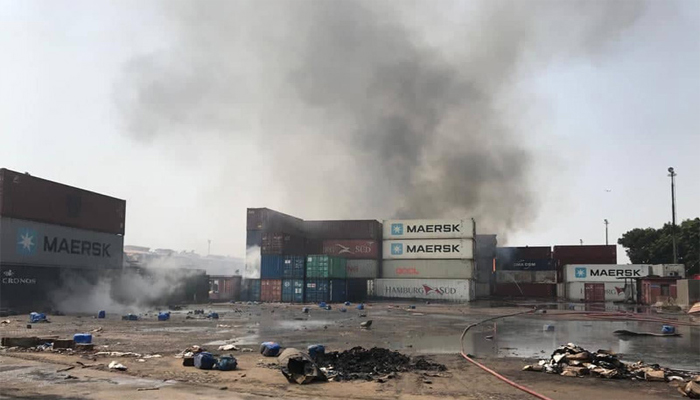 Samples are being taken by setting up a booth in front of the emergency department of Chittagong Medical College (Chomsky) Hospital next to the assistance cell in the district administration in collaboration with the Chittagong district police. Chittagong Deputy Commissioner on Sunday night. Mominur Rahman said 21 people have been identified among the dead. The bodies of 12 of them have been handed over to their relatives till 10 pm on Sunday. Many bodies could not be identified. Therefore, autopsy and DNA test of the victims will be done.

So far, 49 people have been reported dead in the incident, but the district administration has put the death toll at 48. Among the dead were depot workers as well as nine members of the fire service. The condition of many hospitalized is critical. The death toll could rise, said Chittagong Civil Surgeon. Md. Elias Hossain Chowdhury.

7 detained at Heathrow for fighting on Biman flight

A Bangladeshi expatriate was killed in a motorcycle accident in Oman

Large decline in expatriate income in the outgoing fiscal year

Saudi has a positive interest in investing in Bangladesh